Variants in the AEBP1 gene were identified as the cause of a form of Ehlers-Danlos syndrome in four people from three unrelated families, researchers report.

The study, “Bi-allelic Alterations in AEBP1 Lead to Defective Collagen Assembly and Connective Tissue Structure Resulting in a Variant of Ehlers-Danlos Syndrome,” was published in the The American Journal of Human Genetics.

Ehlers-Danlos syndrome (EDS) is caused by disease-prone variations in an increasing number of genes, which may explain the growing number of clinically heterogeneous types of disease among EDS patients.

In the study, researchers describe four individuals from three unrelated families that presented symptoms of a connective tissue disorder. These included joint laxity, redundant and hyperextensible skin, poor wound healing with abnormal scarring, and osteoporosis — all reminiscent of Ehlers-Danlos.

But while the symptoms suggested a connective tissue disorder, previous genetic testing failed to find genetic mutations linked to their clinical scenario.

Using blood samples collected from the patients as well as their unaffected parents, researchers extracted the genomic DNA from white blood cells and performed a whole-exome sequencing (WES) — a strategy to analyze the DNA sequence of all protein-coding genes in the genome.

The analysis revealed the four affected individuals carried variants in the AEBP1 gene, which provides instructions to make a protein called aortic carboxypeptidase-like protein, or ACLP.

ACLP associates with the collagen protein in the extracellular matrix (the structure that provides physical support to cells), and has been show to play a role during development, and also in tissue repair and fibrosis.

The protein has a ubiquitous expression — meaning it is found in several tissues, like the bone and vascular system — and is involved in the formation of collagen-producing cells from stem cells.

Previous studies in mice genetically engineered to lack the AEBP1 gene showed that the animals had abnormal and delayed wound repair, which was linked to defects in fibroblasts, the cells that produce collagen.

Researchers also analyzed skin biopsies from both affected patients and unaffected family members (when available). A microscopic examination of the skin revealed the presence of abnormal collagen fibrils with a ragged or frayed appearance.

Additional experiments showed that the ACLP protein “is involved in organization and remodeling of the ECM [extracellular matrix] through direct binding of collagens and modulation of collagen fibrillogenesis,” researchers wrote.

The team concluded that variants in the AEBP1 gene are the cause of a subtype of EDS. 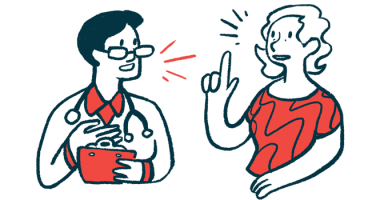